A Project With Ektara

My work on the Elements project really whetted my appetite for more exploration in creating temporary, collaborative sculpture in which the viewer’s participation becomes an integral part of the work.  I began developing ideas for new projects while observing preparations at Kumartuli for Saraswati Puja.  Then after returning from my trip to Molela and Nathdwara, I searched Kolkata for potential venues and partners.

Curator and social entrepreneur Nandita Palchoudhuri connected me with charitable organization Ek Tara, located in the Kolkata neighborhood of Topsia.  Thanks Nandita!!! 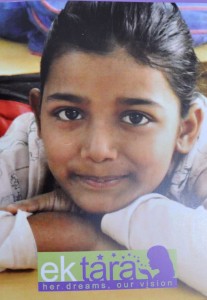 Ek Tara provides opportunities for education and vocational training for more than 500 children and women who reside in the Topsia and Tiljala area.

For our March 2015 project together, I created a four foot tall head in straw and bamboo.  In an exciting two-day workshop, fifty Ek Tara students gleefully and tenderly covered the large head form with imagery in clay. 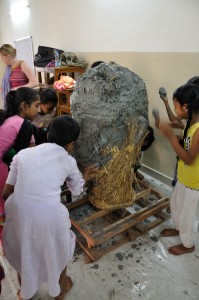 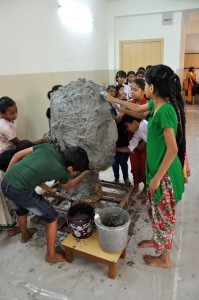 Working with fifty children on a project takes tremendous organization!  Not only were the wonderful Ek Tara  instructors and helpers on hand to smooth the process, but Fulbright-Nehru Student Scholar Julie Schofield‘s assistance was invaluable to me, as she entertained the children who were waiting to take their turn in working on the sculpture. 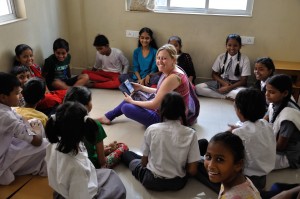 The sculpture’s title, Lucky Indian Forest, comes from the children. They had been asked to bring forth ideas for a title as they worked to build up the image-laden surface of animal figures and traditional designs, using clay press molds I created for them, and traditional sandesh molds from Kalighat. 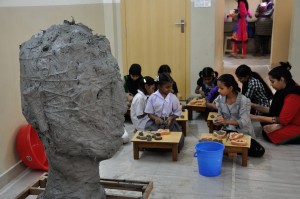 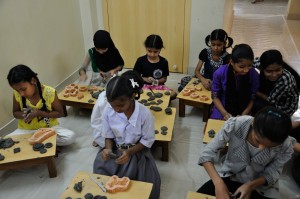 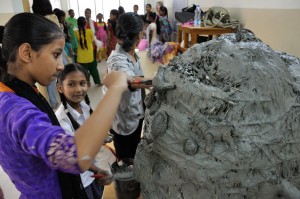 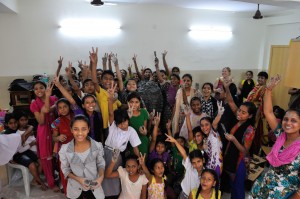 What a great project!   Children and adults alike were enthusiastic and happy. The camaraderie was fantastic.  I hope to do many more projects like this one. 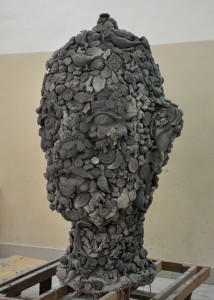 “Lucky Indian Forest” Named by the children of Ek Tara 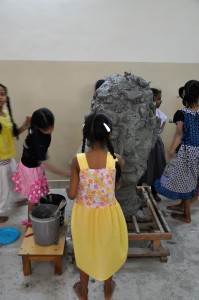 Children covering the straw and bamboo head with clay imagery. 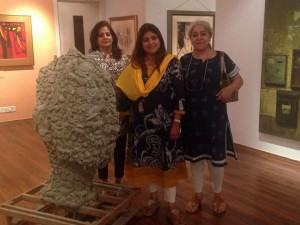