A Dentist to Lions

Dilipda is preparing no less than five images for Jagadhatri  Puja, which is celebrated throughout West Bengal and parts of Odissa about one week after Kali Puja (late October to early November) and exactly one month after Durga Puja. 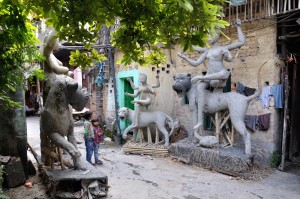 The courtyard outside of Dilip Pal’s Kumartuli studio, where he prepares images for Jagadhatri Puja.

Jagadhatri is considered to be a calm incarnation of Durga.  She is known as the “Holder of the World,” and it is believed that if Jagadhatri is not there,  the world will fall down!   The origins of Jagadhatri Puja are unclear.  One account is that the puja was founded by Sarada Devi, the wife of Ramakrishna.  Jagadhatri celebrations are observed today with great joy in Ramakrishna missions around the world. 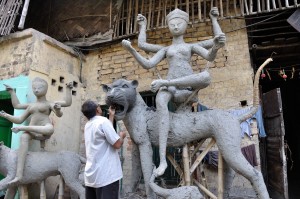 Dilip Pal working on a Jagadhatri image at his Kumartuli studio, Kolkata

Today, Dilipda is amusing himself by repeatedly telling me that he is “The Dentist To Lions,”  as he finely sculpts each feline’s memorable dentition.  In researching Jagadhatri’s history and observing the images of many Kumartuli workshops,  I saw reference to both lions and tigers. 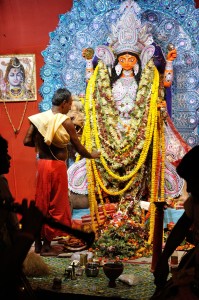 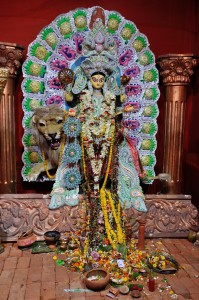 In addition to being accompanied by a lion/tiger, the three-eyed Jagadhatri is described as being the color of the morning sun.  She holds a conch and a bow in her two left hands and a chakra and a five-headed arrow in her two right hands. 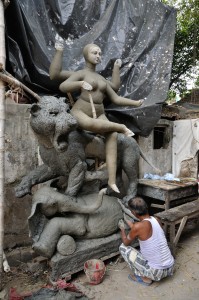 Some of the Jagadhatri images depict the lion stepping upon the elephant demon, Karindrasura, who represents human pride/power.  According to Sri Ramakrishna, “Jagadhatri arises in the heart of a person, who can control the frantic elephant called mind.”